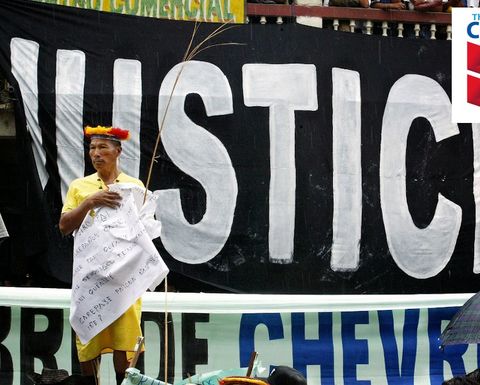 The international day features an online webinar event, including a live press conference from Ecuador where communities have been affected by oil companies dumping 18 billion gallons of toxic waste and 17 million barrels of crude in local lakes and rivers of the Lago Agrio region between 1964-1992.

In a lengthy legal saga, Chevron was ordered to pay US$9.5 billion by the Ecuadorian government for the clean up  in 2013.

However in 2018 the Hague's International tribunal ruled in favour of Chevron, finding the Ecuadorian ruling had been obtained through fraud, bribery and corruption.

The alleged environmental damage was found to be done by Texaco, which was later acquired by Chevron.

However in Australia activists have linked their own version of anti-Chevron Day with the leaked details of the National  COVID-19 Coordination Commission and its heavy focus on development of more gas resources for its proposed manufacturing-based economic recovery.

Activist and environmental groups including CleanStateWA, and Amazon Watch, have taken to social media to castigate the major, accusing Chevron of being a "bad corporate citizen"on a global scale, according to 350 Australia.

"The aim of Anti Chevron Day is to shine a light on the world's biggest greenhouse gas emitting private company in history," 350Perth said on its campaign page.

Activists and left-wing politicians claimed in online posts that the major gas exporter had paid no tax and was making $32 million a day in profits from its Gorgon LNG project.

"The company pays no tax and no royalties for its gas exports," Clean State said on Facebook.

This is despite the company's accounts showing it would pay $10 million in tax this financial year in Australia following a recent settlement with the ATO.

"The gas industry has captured the COVID-19 Commission and destroying hopes for a post-pandemic recovery by having taxpayers pick up the bill for their own infrastructure," Clean State WA tweeted.

"Chevron, Woodside and the rest of the LNG are modern versions of the old robber barons."

Despite the presence of Neville Power as head of the COVID-19 commission and non-executive director of Perth's domestic gas developer Strike Energy there is little direct focus on the west, where the LNG export concerns targeted by Clean State are based.

Chevron likely has little to directly gain from the report's plans given its main assets are Western Australian LNG export concerns.

A west-east pipeline could tie the state into the east coast market, which neither operators nor the state government wants, and make WA subject to the Australian Domestic Gas Security Mechanism, in a worst case scenario.

While Chevron could benefit from sending the odd spot cargo to an east coast LNG import terminal the direction of the federal government is staunchly focussed on developing onshore resources, in New South Wales in particular.

Such details however are unlikely to dissuade activist groups in Australia however, if the mood online is anything to go by.

In a prepared response to the global attacks, Chevron said protecting people and the environment are the company's core values.

"Chevron engages with stakeholders, investors, civil society organisations, customers and other third parties on an ongoing basis to inform its approach to human rights issues," it said.