Not much energy in these alternatives

NOT everyone agreed with Slugcatcher's rant last week about the questionable economics of turning coal seam methane into liquefied natural gas. But, while The Slug was having his fun with an alternative approach to energy there was much more fun happening elsewhere in the alternative energy business – none of it good.

In one of those "bad things come in threes" series of events, first a wind-power scheme ran out of puff. Then a tar sands project got stuck, and finally there was a report that a hydrogen power project had floated away.

At the risk of indulging in a dash of "I told you so" The Slug reckons these three are examples of what can happen when the economics, or environmental credentials, of a project are subjected to close scrutiny - the total sum does not add up, a fate which awaits CSM-to-LNG.

For the detail of what happened last week, let's start with wind power in Britain where the financial numbers have killed a mega-project in the Thames estuary and caused a big power generator to consider walking away from wind power altogether.

Strike One: The dead wind project. This was a big deal indeed, and one supported whole-heartedly by one of the world's biggest oil companies.

Royal Dutch Shell was part of a consortium planning to spend about $5 billion on the London Array, wind turbines that were to have provided greater London with about 25% of its power needs.

The hard-nosed bean-counters at Shell have been first to recognise that the numbers simply don't add up, and the electricity generating partner in the scheme E.ON said the entire venture was now in jeopardy because rising capital costs had made the economics "marginal at best".

Another British wind-power project run by Centrica off the Lincolnshire coast is also being called into question.

Strike two: Tar sands in Canada. Nothing has closed yet, but environmental lobby groups have called for the US Government to maintain a ban on using fuel generated by Canadian tar sands because the entire project is environmentally tainted.

Everyone knows that making oil from tar sands is a smelly, messy business but, until now it has been seen as a source of fuel to lessen reliance on Arab exports.

Those views remain valid, but with every likelihood of the US presidency changing hands later this year, and a much more pro-environment Democrat in the White House, then tar sands could be in for a tougher time.

Strike Three: Hydrogen floating free. This is unconfirmed yet, but at least one newspaper is reporting that the heavily promoted Rio Tinto-BP project in WA to convert coal to hydrogen and bury carbon dioxide deep beneath the ocean floor, has died a quiet death.

The problem seems to be the presence of "gas chimneys" which would allow carbon dioxide to escape into the atmosphere, negating the entire purpose of the coal-to-hydrogen project.

If the report of the death of the Kwinana project, south of Perth, is accurate then BP and Rio will be wearing an equal share of egg on their corporate faces because of the way they promoted their green-power dream, when others doubted it, and the way it appears to have died as a footnote in a daily rag.

Careful readers will spot a theme at work in this week's random thoughts from The Slug's deranged mind - the abject failure of so many alternative energy schemes.

Last week we had wind, tar and hydrogen joining a list already occupied by tidal, wave and biomass - not to mention the entire biofuels sector.

Forgive The Slug for repeating his suggestion that it won't be long before the economics of converting CSM into LNG fall foul of the same financial and/or environmental tests. 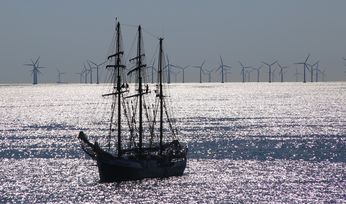