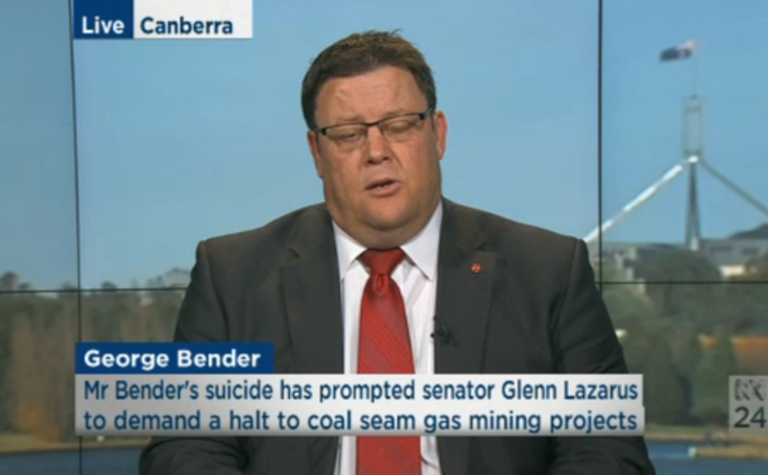 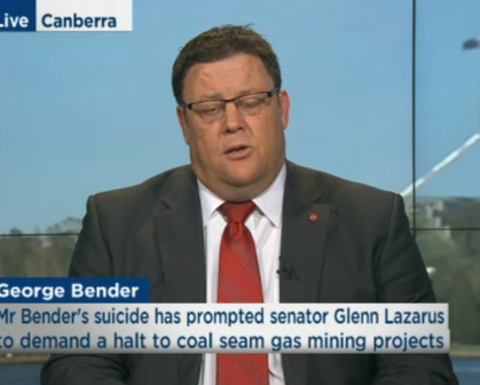 When contacted by Energy News Origin said it was "saddened to hear about George's passing".

"Origin offers our sincere condolences to the Bender family," a spokesman said.

"Out of respect for the family at this difficult time, we are not making any further comment."

However, both the maverick senator and former rugby league player, who once threatened to "shirtfront" former Prime Minister Tony Abbot, and talkback shock jock Alan Jones have blamed CSG companies for driving Bender to his extreme action.

Lazarus described Bender as a campaigner for the rights of landholders in negotiations with CSG companies in the Western Downs region.

Depression and mental health issues are widespread in agricultural communities. Nevertheless, Lazarus put the blame squarely on gas companies and their legal right to extract gas resources, regardless of what surface owners want.

Lazarus repeated his calls for a halt to CSG projects until the human impacts can be established.

"Let's just take a deep breath and put a pause on CSG mining projects until we can establish the human and environmental impacts," he told Macquarie Radio yesterday.

Bender was involved in a long-running dispute with resources companies, with Origin Energy wanting to put 18 wells on his farm, which is also one of the properties affected by Linc Energy's now suspended Chinchilla UCG project.

Origin had reportedly threatened to take him to the Land Court.

Bender claimed CSG extraction nearby had depleted two of the wells needed to maintain his water intensive cotton crop.

He claimed further wells would interfere with the running of his farm and impact his production.

"You've got to agree to their terms or else," Bender told the ABC in the months before his death. "I just reckon it's just all one sided for the resources companies.

"It will completely interfere with the running of the property but that doesn't seem to matter as long as they get wells in and get the gas out of the ground, that's what matters."

His farm is just 10km from Linc's pilot plant, which has been blamed for a 300sq.km toxic plume.

Five charges lodged against Linc could result in the company being fined up to $32.5 million for causing serious environmental harm, although Linc denies any wrongdoing.

Bender is one of several landholders who complained about the smell of gas coming from Linc's facility for years.

"We used to get a terrible stink from it," he told the Guardian Australia earlier this week.

"The smell would make you sick, your eyes would start to burn, it would affect your breathing. The department followed up our complaints but then they didn't take any action."

Bender accused the Newman government of doing nothing to investigate complaints.

Farmers in a 300sq.km exclusion zone now cannot dig a hole more than 2m deep because of the risk of explosion.

Linc is accused of over-pressuring the coal seams, causing overburden fracture and allowing gas and BTEX, a mix of benzene, tolulene, ethylbenzene and xylene, to flow towards the surface.

Lazarus told Macquarie Radio he was "gutted" by Bender's death.

"Not only does this community have to live with this scourge of CSG mining on a daily and nightly basis, now they have to deal with one of their most-respected and most-loved community members taking his life," he said.

"What really gets me so frustrated is the governments of the day just don't care what they're doing to Australians and Queenslanders ... just honest hard-working people that want to work the land.

"They've given them no rights to say 'no' and they just don't care that these people are living in an absolute nightmare and they don't care because these governments are being given donations."

Lazarus said he hoped Bender's death would highlight the pressure farmers were under from resource companies, and he re-iterated his call for a royal commission into the human impacts of CSG extraction.

"They [landholders] don't have anywhere to go - we need a resource ombudsman to be established so they have somewhere to go."

Lock The Gate president Drew Hutton paid respects to Bender and his family.

"George was known and loved dearly for being a brave, honest and kind man and a wonderful farmer," he said.

"Our thoughts go out to his family at this difficult time.

"None worked harder to fearlessly challenge the powers threatening his beloved farm, the groundwater it relies on and the future of his family and local community."

Hutton said the CSG sector was taking a devastating toll on rural communities and farming families in Queensland.

"Many farmers feel isolated and alone against mining companies and are suffering severe stress as a result," he said.

"Our political leaders, including the Queensland Premier, Annastacia Palaszczuk, must do more to protect people from the worst excesses of the multi-national miners.

"Landholders need the right to say no to mining where they don't want it. Heavy coercion and intimidation by cashed up CSG miners and their lawyers needs to end immediately."

Australia Pacific LNG, the joint venture between Origin, ConocoPhillips and Sinopec, said it had entered into more than 600 compensation agreements with farmers in Queensland, and that farmers stood to gain from compensation for any loss of land or other impacts on their business operations.

APLNG said the amount of land used by a CSG well when in production was small, about half the size of a netball court.

Of the 335,000 hectares of good quality agricultural land in the APLNG project area only 7% is expected to be disturbed during construction and just 1.3% (4,319 hectares) will be removed from production for the life of the project, APLNG claims.

Bender is survived by his wife Pam, three sons, and a large extended family. The family has farmed at Hopetown since 1874. 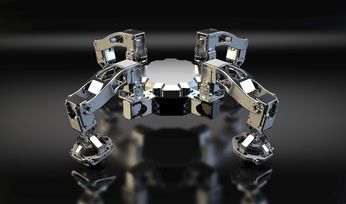 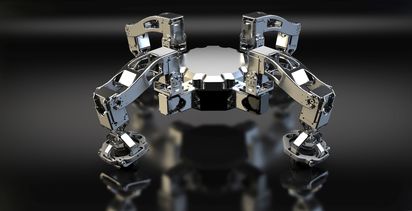 Renewables to out-perform gas in electricity sector by 2030: RMI