WESTERN Australian minister for mines, petroleum and energy Bill Johnston praised the West Erregulla project, under development by ASX-listed Strike Energy and partner Warrego Energy, as a “transformational” opportunity for the state. 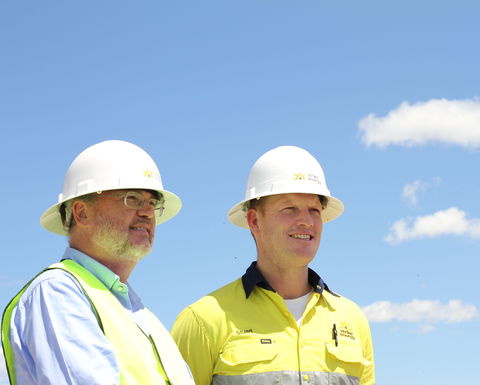 Johnston visited the West Erregulla-3 appraisal wellsite in exploration permit EP469 Friday, dubbing the project a major development that could bring down gas and electricity prices for industrial users in the state. Energy News attended the visit.

"There are no more exciting projects than the onshore region of the Perth Basin," he said in a doorstop interview  onsite.

"This is absolutely transformational activity for Western Australia's energy sector and our broader economy."

Strike believes the West Erregulla field could hold well over 1.2 trillion cubic feet of gas, though Warrego's estimate is around a 2C gas resource of 513 billion cubic feet.

The Ensign Rig 970 is drilling the well ahead at a depth of about 2000 metres. It is expected to be drilled to 5000m, making it one of the deepest wells to be drilled onshore Australia in history.

West Erregulla-3 is designed to test the continuation of a commercial gas accumulation in the northern fault block of the field.

Strike made a major discovery in August last year at its first exploration well, West Erregulla-2, which intersected the Kingia and High Cliff formations, encountering a gas column of nearly 100 metres.

The field was targeted after reprocessing of seismic and followed the Waitsia discovery some years before. Previous geological assumptions said gas at the depth of the Waitsia and West Erregulla project were too deep to be commercial and exploration in the basin had always concentrated on the shallower Dongara sandstone.

"The last two years in Western Australia has seen some extraordinary resources discovered in mining and oil and gas," minister Johnston said.

"It really is amazing what the application of technology allows, that's really what we're talking about… drilling deeper than we've drilled before and using new technology to discover resources we didn't know were there before."

Johnston said he was excited to see Australian companies "willing to take the risk on projects like these and look at opportunities in a new light."

Earlier this month operator Strike (50%) hit a snag at the well after losing the drill bit and motor downhole. It was then required to drill a sidetrack.

Gas produced from the West Erregulla field will be piped through a network operated by AGIG.

Gas produced from the West Erregulla project will be destined for the Western Australian domestic gas market.

Two agreements with major industrial gas users have already been signed. Warrego signed a binding agreement with Alcoa for 155-petajoules of gas, while Strike has signed an agreement with Wesfarmers' subsidiary CSBP for an 11-year gas supply of 25 petajoules per day.