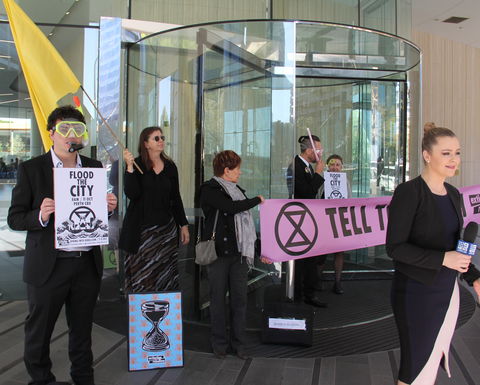 This is one of several protests against the oil and gas industry in Perth in recent months. Protesters initially targeted Chevron Corp.

Coal projects have been the subject of ire in the eastern states, but with limited coal projects outside of Collie in the state protesters have gone after gas giants instead.

A small group of 15 protesters used banners to block the main doors to the building, and wore snorkels with signs warning of rising water levels caused by climate change.

The activists told Energy News this morning that they would hold a series of protests across industry buildings over the next fortnight and would target operators that "aren't stopping WA levels of emissions going up."

One protester, Lorraine, 51, said she had joined the action to disrupt Woodside today because she considered the company to be having a larger impact on WA emissions than other companies.

"Woodside are major fossil fuel polluters and they are damaging the climate," she told Energy News.

"Western Australia's carbon emissions are going up. We need to do something about it now and this is the start of a major action program we will run up until the 11th of October."

Lorraine said that Extinction rebellion would be running similar protests between the 7th of October and the 11th.

"If industry does not listen to us, the planet will die. We will not stop… trying to get our message through."

Lorraine accused industry of not listening to scientists and that an earlier speech by Woodside's chief Peter Coleman at Gastech was "virtue signalling".

At the conference last week Coleman said industry couldn't continue to wait on government and policy-makers to take action on climate change.

He also called on oil and gas producers to work to cut carbon emissions and take "real steps" to be part of a lower-carbon world.

However when Energy News pointed this out to the protesters, they were quick to call it greenwashing.

"Coleman's speech was virtue signalling. We hope it's the truth but it's yet to be proved," Lorraine said.

Energy News was not the only media organisation to report on the issue today, Perth Now, Seven, and Nine have all filed stories this morning.

However Energy News understands that none of the mainstream networks had approached Woodside for comment, and are simply running the protesters commentary.

In a statement to Energy News in response to Extinction Rebellion's action, Woodside said the group needed to understand the role gas has in the future transition to a lower carbon economy.

"The world needs more energy, delivered in cleaner ways. Natural Gas has a big role to play. For example according to the International Energy Agency, switching from coal to natural gas helped avert 95 million tonnes of CO2 in 2018 alone," a Woodside spokesperson said.

"The Intergovernmental Panel on Climate Change 2014 report said "Greenhouse Gas Emissions from energy supply can be reduced significantly" by switching to gas. Woodside contributes to the challenge by supplying natural gas, improving our energy efficiency, and developing innovative new markets and technologies for the efficient delivery of energy, such as LNG to displace higher emission fuels in shipping." 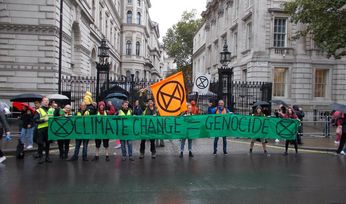 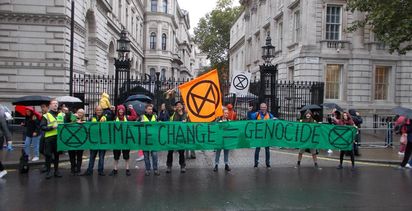