New Zealand Oil and Gas and its PEP38460 partners have moved swiftly to contract a vessel to shoot 350 sqkm of 3D seismic over the Tui oil discovery and nearby similar structures.

NZOG exploration manager Eric Matthews said from Sydney that the Veritas vessel Pacific Sword was due to arrive in Taranaki waters from Singapore by mid-March and should have completed its program a month later.

He said the primary purpose of the Tui 3D seismic was to define the extent of the eocene-aged Kapuni F sands oil pool discovered last month.

By extending the survey over several similar features nearby, as well as the Tui prospect, NZOG hoped to generate several targets for a drilling campaign provisionally planned for next summer.

Matthews told EnergyReview.Net that, given good results from the 3D seismic, a Tui appraisal well, plus one of more wildcats into other PEP 38460 prospects, could be drilled by a semi-submersible rig mobilised to New Zealand waters in the 2003-04 summer.

Commentators says the perceived prospectivity of Tui, Hector, and Pukeko in 38460 has been enhanced by the Tui discovery, which seems to show the eastward migration of oil, as opposed to gas, from west of Maui.

Last month the Tui-1 well had encountered a gross oil column of 10m within the Kapuni F sands, of which 100% was net oil pay in excellent quality reservoir rocks. Though Tui-1 was plugged and abandoned, without being tested, as scheduled, it is believed the well could have flowed at substantially more than 3000-4000 barrels a day. Pre-drill estimates of recoverable oil from the F sands had been about 50 million barrels, though not from this single well. 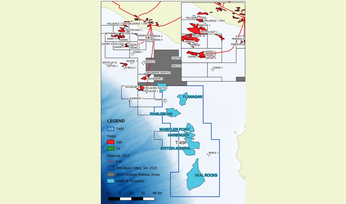 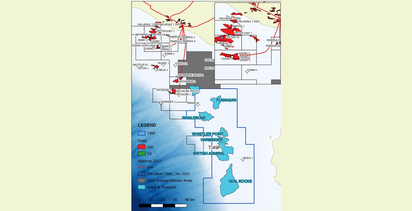