JUNIOR Pilot Energy has taken delivery of the independent resource estimate for its shallow water WA-503-P, a single graticular block in the Dampier Sub-basin, inboard of the giant North West Shelf complex, where it believes there are prospects sufficient to underpin a commercial oil field development if drilling is successful.

The report on the Carnarvon Basin block from Gaffney, Cline & Associates has estimated a best case gross prospective oil resources for the three exploration leads identified by Pilot as being 10 million barrels in the Updip Janus lead.

There is also potential for up to 19.7MMbbl (high); 31.1MMbbl with high side potential of 72.8MMbbl in the Updip Orion lead; and 6.9MMbbl with upside to 14MMbbl in the Bojangles lead.

The focus in the block is on the Legendre, Eliassen and M Australis sands across the Lower Cretaceous to Upper Jurassic sandstone reservoirs within the oil rich Legendre Trend, situated along the eastern flank of the Lewis Trough.

Pilot (80% and operator) and Black Swan Resources (20%) are aiming to complete an 80sq.km 3D survey over the entire block this year to transform the three leads into prospects.

Existing exploration wells within and adjacent to the block confirm the presence of a working oil system, having encountered oil shows and, in one case, a 4m oil column.

The two wells drilled in the area back when it was WA-1-P were Orion-1 and Janus-1, and both had oil shows.

Orion-1 was drilled by Woodside Petroleum in 1990, the first well to be drilled on the high side and adjacent to the Rosemary Fault System, primarily to test the Angel Formation.

While the well encountered hydrocarbons, minor fluorescence and increased gas readings in various strata between 1691m and 2175m, with the best being the M Australis.

The well was terminated at 2475m in the Dingo Claystone without testing the deeper Mid-Jurassic Sandstone of the Legendre Formation.

Janus-1 was drilled by Apache Energy in 1998 to test the hydrocarbon potential of sandstones within the Legendre Formation in a north-trending tilted fault block on the upthrown side of the Rosemary fault system just 3km from Orion-1.

Janus-1, drilled in 36 m of water, reached a total depth of 2501m within Legendre Formation close to prognosis and similar to that encountered in nearby wells.

The top Legendre Formation was intersected 49.2m high to prognosis, believed to be the result of slower velocities than predicted, and 102.5m of the Eliassen formation was found to be present but not predicted.

In 2012 a Santos and Apache-led JV drilled the Hoss-1 commitment well in WA-208-P, just outside the block.

Hoss-1 was drilled in 60m of water to a depth of 2100m, targeting a 13MMbbl prospect, however the well was plugged and abandoned after minor oil shows were intersected.

Pilot believes the planned seismic will cost at most $1.5 million, and a well should be drillable for $20 million or less.

The Legendre field is situated just 20km to the northeast of the block, and produced over 42MMBbl of oil from excellent quality sandstone reservoirs during its life, while the 100MMbbl oil-in-place Hurricane structural/stratigraphic discovery is nearby, as is the small Sage-1 discovery.

"GCA's assessment confirms the potential for significant oil discoveries within WA-503-P, well above the minimum economic field size for the permit such that any discovery on one of the leads has a good chance of development," Pilot managing director Iain Smith said.

The company will use the seismic data to seek a farminee to fund jack-up drilling.

Black Swan, a company associated by Rampart director Conrad Todd, is being free-carried for the first three-year permit term, which ends in 2017. 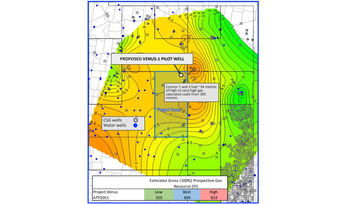 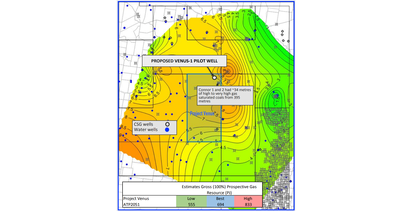