"We are calling for investment," Gusmao said.

"Development of the petroleum industry is beneficial for all the people."

The steadfast support of the government has been notable, with ministers and dignitaries like Gusmao and former President Jose Ramos-Horta present all day, and in attendance at the gala dinner last night.

This is the first licensing round since 2006, and had been held off until the maritime border treaty between Timor-Leste and Australia first signed last year by both nations was ratified at the end of August when Prime Minister Scott Morison visited Dili.

Ten PSCs have since been signed, and the Bayu Undan field which feeds the Darwin LNG plant operated by ConocoPhillips has been fully transferred into Timorese hands.

The nation is offering 18 blocks, 11 offshore and seven onshore and has opened a data room at the convention. Energy News understands Carnarvon Petroleum, whose COO Phil Huizenga presents today on the Buffalo oil field, has already had a look.

Timor-Leste has spent US$23 million on aerial gravity and magnetic surveys already.

To drive interest the ANPM will be conducting a roadshow through Houston, London, Singapore and the Australasian Oil and Gas convention in Perth next year.

There is no signing bonus, rather the ANPM will be assessing companies' technical and financial capabilities and their work programs and environmental records. Licenses will be for a period of seven years. Profit split will be 60% to companies and 40% to the government, and zero cost recovery. Income tax will be 30%.

"We conducted some sort of assessment of the fiscal regimes in the region, about four years back and one of the things we found out was that surprisingly that our fiscal regime is very competitive in the region," Da Silva said yesterday during a panel discussion.

‘We also have the uplift incentive of 11% for offshore and 9% plus long term rate for onshore," he said.

"We are the smallest of the producing countries in the region. We have discoveries that have not been developed," he said.

There is no vertical limit; companies may drill to any depth without a change in royalty or ownership.

There will be local content requirements, though how those will work in the small nation which is still developing supply chains and worker capabilities is yet to be fully outlined.

Much of the rest of Thursday was dedicated to technical presentations outlining Timor-Leste's lesser known geology, such as the onshore northern belt and the deeper offshore Triassic plays, underlining the need for more exploration.

Part of Timor-Leste licensing round 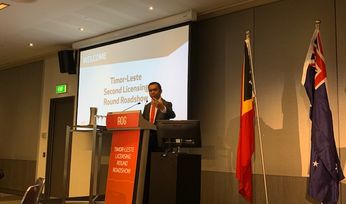 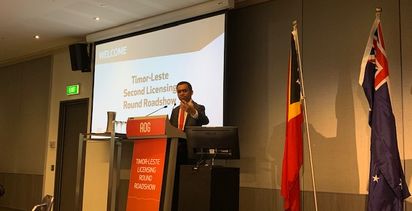 Timor Licensing round at AOG best attended of roadshow

Armour pays down debt and brings in the cash