ORIGIN Energy and its smaller Irish joint venture partner Falcon Oil and Gas have begun fraccing the Kyalla-117 well, after months of delays caused by the COVID-19 pandemic. Origin Fracks its Kyalla-117 well in the Beetaloo.

The venture had been forced to abandon fraccing plans and completion of the Kyalla-117 appraisal well earlier this year after the pandemic led to movement restrictions and hard border closures.

The appraisal well has been labelled a "well to watch" by analysts and industry. The success of the well is seen as a litmus test of the prospectivity of the new frontier region and the challenges other operators, including Santos and Empire Energy may encounter.

Consultancy EnergyQuest put the well on its watch list last year, meanwhile the NT government has heralded it as a "new era" of domestic gas exploration. The peak body for the oil and gas sector, the Australian Petroleum Production Exploration Association has previously said the well would play a "vital role" in the future of the Beetaloo Sub-basin.

Kyalla-117 was drilled to a total depth of 3809 metres with a 1579 lateral section in February this year. Total costs of drilling and completing the well are expected to be in the range of $50 million.

During drilling elevated gas shows with relatively high liquids were observed in all three of the target reservoirs encountered.

It aims to test the extent of the Velkerri liquids-rich gas play.

After fraccing the next phase of operations will be to production test the well.

"Initial results from this are expected by the end of the year, with full results in the first quarter of 2021," Origin said on Monday.

Origin is paying the full amount of the current operations, up to A$25 million, as part of its farm-in agreement with Falcon.

If the well proves as commercial as the venture expects, there are multiple commercialisation opportunities, including the Amadeus to Moomba pipeline announced in August by Australian Gas Infrastructure Group and Macquarie.

Earlier this year, in May, government funded department Geoscience Australia released new data on the Beetaloo as part of its Geological Bioregional Assessment Program.

The report specifically identifies locations of potentially significant gas resources and provides geological and environmental data for industry which were not previously known.

Three main targets are outlined in the report - the Velkerri, Hayfield, and Kyalla formations. All three are all targets for Origin and Falcon. 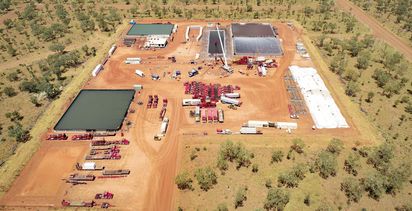