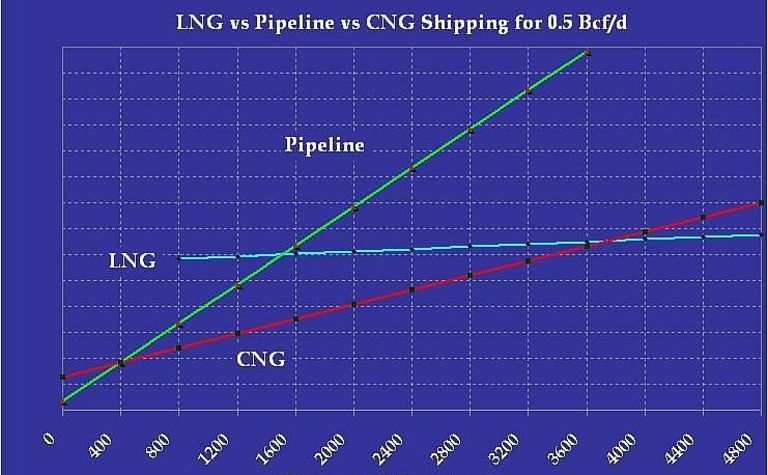 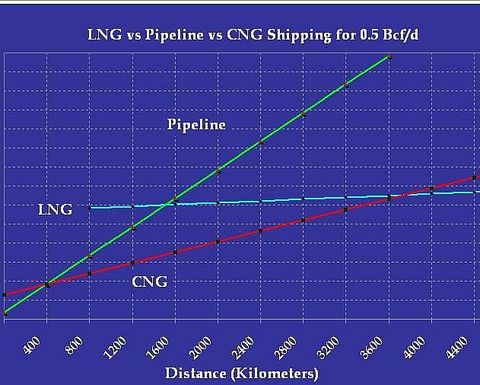 CNG also offered other advantages in that it was scaleable and fitted well with smaller markets and markets that ramp up. It was also advantageous for high risk markets or countries as the technologies could be rapidly redeployed. CNG could also monetise deep-water gas reserves, Bradley said.

Bradley said the current world leader in CNG technology alternatives was EnerSea Transport LLC’s Votrans concept. It had strategic and financially capable partners include: K-Line, Mitsui USA, Hyundai, Tanker Pacific, Nippon Steel. Votrans uses steel vertical pipes, chilled to -30C, and compressed to 1,400 to 1,850 psi depending on whether the gas stream was rich or lean. It had a fluid displacement rate at above 99% volume when off-loading without compression.

ABS Approval in Principal was received in April 2003 for a complete CNG ship which is currently undergoing materials and functional testing. World wide feasibility studies had been done with Bradley saying there were multiple global projects approaching the FEED stage.

CNG shipping would probably gain wide acceptance once the first project had been commissioned, according to Bradley.

CNG usage is not new, having been first rolled out in the 1960’s by Columbia Gas on the Sigalpha vessel, which comprised vertically stacked steel pressure bottles and was tested in New York Harbour.

CNG became more established in the 1980s when was used onshore in public and commercial fleet conversions, primarily buses, and bulk haulage with steel tube trailers.

With the improvements in steel technologies (X80+ steel) and composite ‘wound’ technologies in the 1990s, CNG storage solutions began to come into their own.

Canadian developers Cran and Stenning developed the Coselle spooled pipe CNG technology which was based on modules of spooled small diameter six-inch pipe of about 10 miles each with gas being compressed at over 3000 psi.

Classification societies such as ABS and DNV also gave credence to this new technology as they became involved and lent their skills and audit capacities to the CNG sector.

Following on from the Coselle concept, TransCanada developed the Gas Transportations Modules (GTM) principal, based on steel pipe with forged steel heads, hoop wrapped in composite which made it 40% lighter than ‘high pressure’ steel alternatives. In 2002 it received the stringent ASME pressure vessel standard and Lloyds in 2003 gave it in principal approval for its use in ships. Manufacturing facilities are now underway in St. Johns, Newfoundland.

Another technology alternative Bradley discussed was the Knutsen group’s Pressurized Natural Gas (PNG). This all steel, large diameter (42”), vertically stacked pressure vessels stores gas at 3,000 – 3,600 psi and is actively developing a project in Norway and also active in Indonesia with a joint venture with TCPL on the Husky project.

Bradley said prototype pressure vessels had been built and tested with DNV approval in principal, based on off-shore pipeline codes. One shortfall was the possibility this solution may leave about 15% of its payload in the vessel after payload delivery.

It was extremely light weight compared to steel alternatives but the costs of all composite pressure vessels were unknown with carbon fibre being rationed, according to Bradley. This system received ABS in-principle approval for pressure vessels only in September 2003.

Deal with Tamarind as new JV talks to government 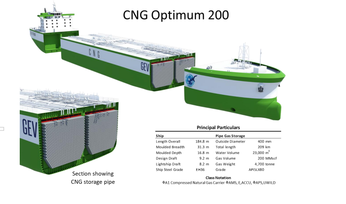 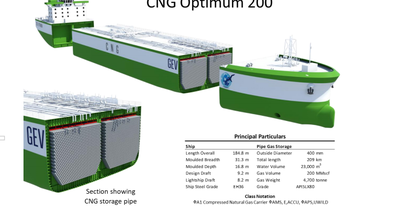