From Pluto to Siberia: taxing times for LNG

EVER wondered why there are so many tall, skinny, houses in Holland and many old houses in Britain have bricked up windows? Slugcatcher and the chaps who run Shell Oil, know the answer  tax.

Ever wondered why so many strange suggestions are floating around the oil patch today? Same answer.

Tax, in its many and varied forms, is fast becoming as big an issue in the petroleum industry as exploration and discovery of the barrels needed to fuel the modern industrial world.

Britain’s infamous window tax of 1696 produced a remarkable response (building houses with as few windows as possible and bricking up old ones).

In the same era, Holland’s policy of taxing by the width of the house at ground level led to the construction of thin houses with upper stories wide than their ground floors. Not an ideal form of construction, but effective for minimising exposure to the taxes of the time.

In Australia, talk of a “tax” in the form of a forced gas reservations policy by the Government of Western Australia, has re-started plans to liquefy gas on offshore barges rather than bring it ashore.

In Russia, fiddling with environmental approvals on the Sakhalin-2 LNG project is nothing more than an attempt to levy another form of tax on an oil producer – the forced relinquishment of a portion of the $US20 billion ($A27 billion) project to a government agency, Gazprom.

The industry response to the Russian “tax” is yet to be seen, but it’s a fair bet that the chaps at Shell will come up with something creative, in line with their Anglo-Dutch heritage.

But as we await the development of a tall, thin, windowless LNG plant somewhere north of Japan, Slugcatcher finds it more interesting to consider the Australian problem, and the wider question of how tax is creeping into petroleum at a faster rate than ever.

The latest news, according to reports from Canberra, is that the Federal Government has found a legal loophole that will save LNG proponents from being levied a state tax in the form of compulsory gas retention – and sale of gas to local industry at a discount.

Federal Industry Minister Ian Macfarlane was reported in the Financial Review newspaper as saying that his initial legal advice seeking a way to stymie the WA Government’s tax plan wasn’t encouraging. But since then he had received advice “suggesting that we can intervene”.

The Slug ain’t a constitutional lawyer but reckons this second piece of advice relates to the gas in projects such as Pluto, Gorgon and Brecknock, being located (all, or in part) in federal waters over which Canberra has jurisdiction and even if it is piped ashore, the gas remains federal property – liquefied or in gaseous form.

No doubt, the WA Government will retaliate and argue that it has jurisdiction over land matters – and at this point The Slug bows out and leaves it to the experts.

But what he takes away from the Australian experience over offshore versus onshore taxing, and Russian claims over environmental damage from the Sakhalin development (which might be satisfied by gifting a chunk of the LNG project to a government agency), is that tax is looming larger than ever in the plans of the petroleum industry.

Just as taxes forced some astonishing charges to the architecture of Amsterdam, so too might the taxing habits of Australian and Russian governments force some surprising evasive action plans.

In Australia, even if the federal and state governments indulge in another round of high-brow legal argument, there will undoubtedly be a desire to develop projects under a single rule of law (and tax) – hence the revival of barge-produced LNG in federal waters, totally bypassing the states.

In Russia, it’s a different sort of problem which might well involve paying the price demanded, or spending time in a Siberian gulag.

Whatever the outcome, there is a lesson running through all of this. When governments smell fat profits cooking, they can be awfully creative in their design of new forms of tax – and industry must be just as creative in dodging the tax bullet!

Argues impact of increased emissions not factored into go-ahead 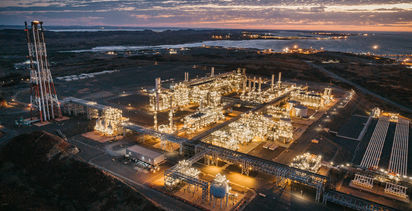