WOODSIDE Petroleum is progressing its plans to expand its entire supply vessel fleet to duel-fuel and potentially open up small-scale LNG across northern Australia by joining BHP Billiton and Rio Tinto among others in a joint effort to study an LNG-fuelled Capesize bulker. 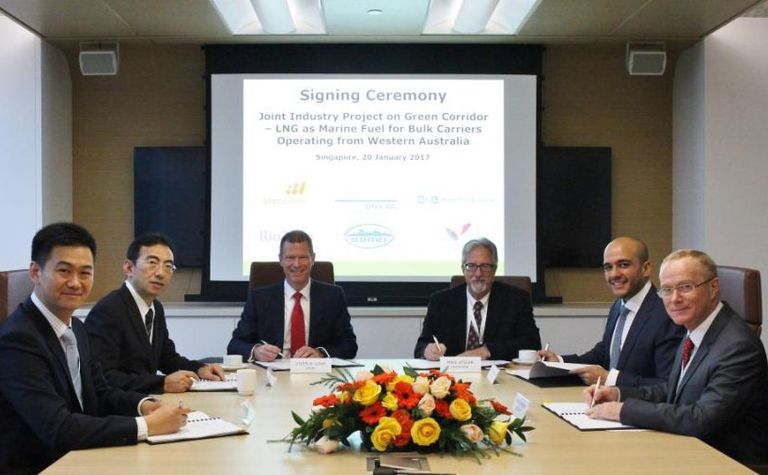 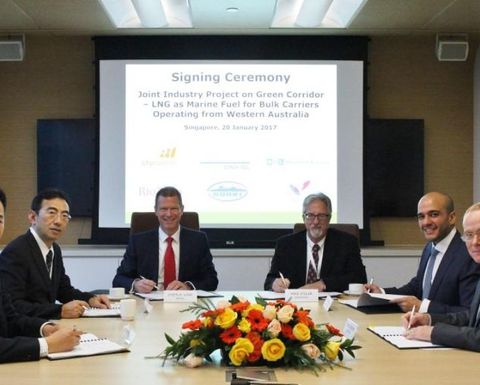 Woodside chief operating officer Mike Utsler was on hand in Singapore to sign up to a joint venture project put together by DNV GL including BHP, Rio, Mitsui OSK and the Shanghai Merchant Ship Design and Research Institute called "Green Corridor" to cut merchant vessels' emissions of nitrogen oxides and sulphur oxides.
The move, which will also examine the technological and economic feasibility of an LNG-fuelled bunker, comes as international treaties have called for stricter emissions standards.
Woodside CEO Peter Coleman said new regulations from the International Maritime
Organisation restricting the sulphur content of marine fuels from 2020 would make LNG an attractive alternative.
"As Australia's leading producer of LNG, Woodside is pleased to be working with the mining and shipping industries to explore the potential for LNG fuel use by bulk carriers on the ‘Green Corridor' trade routes between Australia and China," Coleman said in a statement this morning.
"Woodside has recently taken delivery of the first LNG-fuelled marine support vessel in the southern hemisphere, the Siem Thiima.
"Following the successful introduction of this vessel into our operations, Woodside will assess the viability of further adoption of LNG-fuelling of our vessels.
"We think the trade routes from northern Western Australia are the perfect place to drive the transition to LNG as a marine fuel, with exporting industries in close proximity to world-class LNG supplies."
Vessels are required under the International Convention for the Prevention of Pollution from Ships to use bunker fuel with a sulphur content of 0.1% or less in Emission Control Areas.
In general sea areas (all excluding ECAs), the treaty is expected to reduce the maximum sulphur content of bunker in use from the current standard 3.5% to 0.5% by 2020.
Utsler inked a five-year charter contract with Siem Offshore at LNG18 in Perth last year to deliver Australia the southern hemisphere's first LNG-powered marine support vessel to be bunkered out of the Kings Pay supply base in Karratha to support Woodside's North West Shelf and Pluto operations.
Utsler said that Woodside, which operates 16 platform supply and offshore support vessels on average, wants to position itself as the "partner of choice" by demonstrating the new capability on a broader basis for future partners.
He expressed the hope that the deal with Siem Offshore vessel would lead to "what we believe is a business opportunity", as there was a significantly untapped market for opportunity domestically for the use of LNG including iron ore cargo shipping, trains and trucking.
"Longer-term from a vessel deployed bunkering aspect you can see scenarios where, as we expand and develop greater marine operations and opportunities, [that] marine bunkering could become an important part of building the chain of domestic LNG utilisation all across the Northern Territory-Western Australia coastline," he said at LNG18.

Slattery nowhere to be seen in proposed line up