THE presence of gas chimneys in geological strata slated for geosequestration has seen plans for a "clean-coal" hydrogen plant in Kwinana, south of Fremantle, Western Australia, go up in smoke.

The $2 billion project was designed to burn coal, converting it into water, hydrogen and carbon dioxide.

The hydrogen was to provide fuel for a 500MW power plant supplying electricity for 500,000 homes, while the CO2 would have been buried in geological formations off the coast .

Feasibility studies for this project envisage injecting 4 million tonnes per annum of carbon dioxide into saline reservoirs about 2km under the seabed off Fremantle.

But, according to a report in the Weekend Australian, more than two years of investigations and several million dollars of research have confirmed that the geological strata intended for the geosequestration of the plant's CO2 emission, contain gas "chimneys", or subsurface leakage of gas from a poorly sealed reservoir.

This would have allowed the CO2 to escape.

BP confirmed on Friday that the plant would not be built, the report said. 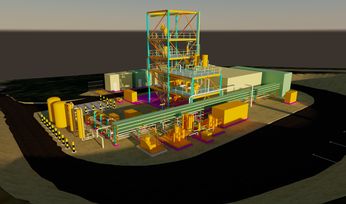