QUEENSLAND CSG chaser Comet Ridge is getting more excited over the conventional prospectivity of its Galilee Basin permits, despite the fact most other companies have walked away from the frontier region.

The junior says reprocessing and reinterpretation of 1980s vintage seismic over the Carmichael prospect has resulted in a significantly larger structure than previously interpreted, leading to a larger gas-in-place volume.

The work was completed by SRK, which calculated that the prospect could host as much as 861PJ (3C) gas-in-place.

He believes that drilling a second well using latest technology, including a light weight mud system or air drilling, and testing gas sands immediately on penetration, could allow a much more significant gas flow result than was demonstrated in 1995 with the original Carmichael-1 well.

The company said results of seismic work, petrology studies of cuttings and porosity/permeability analysis of core plugs taken from the nearby Lake Galilee-1 well, which recovered oil from the Lake Galilee sandstone when drilled by Exoil in 1965 was highly promising.

Carmichael-1, drilled by Maple Oil & Exploration, flowed gas to surface on three tests from deeper sandstone intervals around 2600m, but the drilling used a high mud weight, which could have damaged the reservoir.

The well was designed to test for potential oil reservoirs, and despite the fact it flowed gas a thick deeper section of potential sandstone reservoir was not tested and the well was abandoned.

Comet Ridge drilled the Montani-1 corehole above the Carmichael prospect in 2010, finding 24m of coal in the Betts Creek Coal Measures and 22m of shale. That well was terminated at 938m.

For Comet Ridge, the potential for gas outside the coal seams of its wider Gunn project is tempting as it could be developed more quickly than the CSG and used to support some of the proposed mines in the area.

Carmichael-1 is situated just north of the Gunn project area where Comet Ridge has drilled a number of shallow CSG wells, however, the company has never tested the deeper sandstone formations.

Gunn has 3C contingent resources of 1870 petajoules and a prospective resource of 579PJ.

Comet Ridge has engaged an independent expert to calculate the contingent resources for the Carmichael prospect with the aim of attracting a farm-in partner to drill the target using modern techniques to assess if gas will flow from the sandstones at commercial rates.

The conventional chase has overtaken the CSG work, despite the fact a review of the core from the Harrington-1 well, a 24km step-out from the Gunn-1 and Gunn-2 wells, proved coals containing gas extended with some consistency over a wide part of the eastern Galilee Basin.

The company is attempting to use the existing data to define sweet spots in the Betts Creek coal beds for future drilling.

Carmichael said several potential opportunities existed for gas sales and with the recently elected Queensland government indicating its continued support of the Galilee Basin coal mines, there remained a potential user of significant volumes of gas.

The company also confirmed that it had been told an application to change the work program from two CSG wells in its PMP 50100 permit in New Zealand's West Coast Basin was likely to be refused.

The company has switched its focus to oil exploration and feels two wells is overkill.

Comet Ridge is reviewing its options. 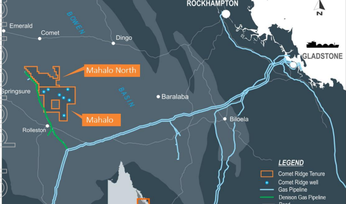 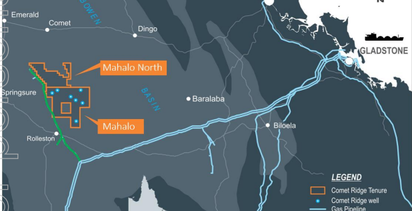