THE North Eastern Gas Interconnector is no certainty to make final investment decision at the end of 2016 according to Wood MacKenzie's senior analysts, who have revealed a litany of issues with the proposed pipeline to Energy News. 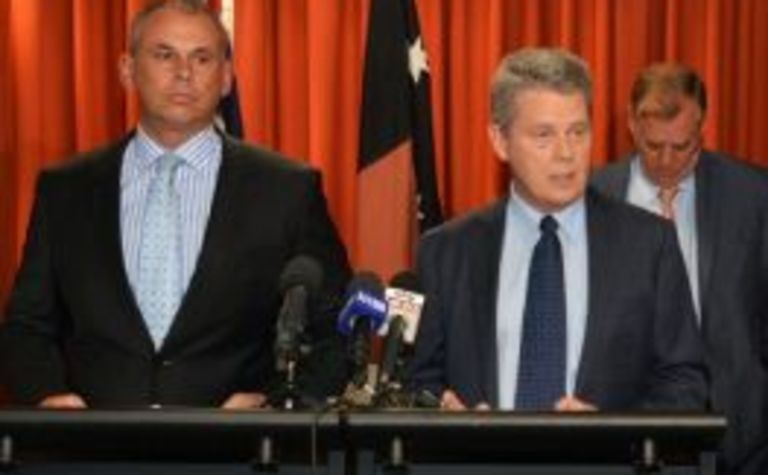 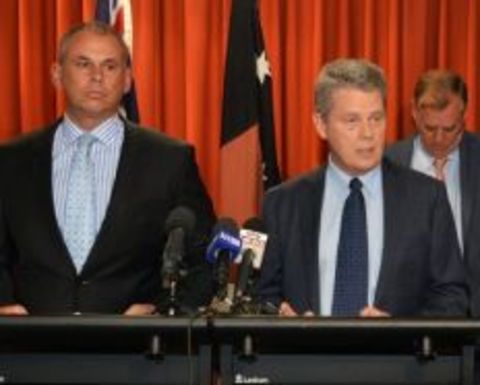 These uncertainties chiefly revolve around the unconventional hype behind the NEGI, the likelihood of long-term capacity agreements to underpin it and who will pay the tariffs.

That's to say nothing of the fact that such massive $800 million investment is expected to be made at a time when explorers are pulling back spending due to low energy prices.

Wood Mackenzie's Asia Pacific upstream oil and gas division vice president research, Gero Farruggio, told Energy News that, considering "investing in riskier projects where you're not looking at production for a number of years or even potential access to the pipeline for a number of years, it's a difficult environment to see this investment continue".

Tariffs was one issue raised by Santos, which naturally preferred the rejected Moomba route.

The NT government selected the shorter and cheaper construction of the pipeline from Tennant Creek to Mount Isa by Asian developer Jemena and its contractor McConnell Dowell.

A Santos spokesman told Energy News that the total cost of transporting gas to east coast demand centres had to be competitive to realise the full benefits of the development.

Similar issues were raised in Wood Mackenzie's report published last week, Risks remain for the NEGI, in which its analysis pointed to concerns around logistics and remoteness constraints, along with the fact that while there are proved reserves of conventional gas, to date there have been no commercial flows from unconventional resources.

As Statoil has found out, all the data can look excellent, but sometimes hydrocarbons just won't flow.

The initial capacity of the pipeline will be under 100 million cubic feet per day - about a seventh of an LNG train. That's less than 5% of the east coast gas market.

The key risk is whether long-term capacity agreements will be achieved to underpin the pipeline, Kavonic said.

While FID is targeted for the end of next year for start-up of operations in 2018, Kavonic says there's plenty of water that needs to pass under the bridge before that happens.

This is where the issue comes in around what the de-risking of some unconventional reserves would achieve for the NEGI.

Wood Mackenzie models that from Blacktip and Central Petroleum's Mereenie, Dingo and Palm Valley assets, there's only enough reserves to keep the proposed pipeline full for around 10 years.

Central has Dingo and Palm Valley on its own, and shares Mereenie with Santos.

"The tariff you need to keep the NEGI full for 10 years is twice the tariff you would need if it was, say, a 25-year life, which is more typical for a pipeline," Kavonic said.

"That would drastically impact stability to being economic [to] stack up."

Then there is the question of what happens if no material unconventional discoveries are drilled out and proved commercial before 2028.

Shale and tight zones can take some time to unlock.

"Central is saying there are going to be additional supplies, the government says it could be unvonventionals, but it's all unproven," Kavonic said.

"There are also additional offshore fields, but you can't bank on it now, so who's going to take the risk that 10 years comes up and people didn't find the additional gas and who holds the bag?

"That's the key question which will really determine the next phase."

That said, if someone is willing to take that risk and if the pipeline could be assured of 25 years' worth of gas, Wood Mackenzie does see the pipeline being able to deliver competitively into the Mount Isa market at a limited 100MMcfpd, although Jemena says it can double capacity before FID if required.

"If we say it would be filed for 10 years, that assumes just under 200 billion cubic feet is available from Blacktip in addition to what the NT government will need," Kavonic said.

It seems that the NT government has contracted more than it needs from Blacktip, which is why its Jemena announcement coincided with the Territory's Power and Water Corporation signing agreements with Incitec Pivot to supply and transport gas via the NEGI to Mt Isa in Queensland.

PWC will use the gas sales agreement to lock-in a guaranteed gas supply for Incitec Pivot for approximately 10 years to 2028, from completion of the NEGI.

While this was a foundation swap, it's only a small amount. The question remains about the bulk of the capacity, and who's going to pay the tariffs?

The way Wood Mackenzie sees it, there are three options, and all of them have issues.

While producers are typically best placed to take upstream risk onshore, there is Santos, which has just fended off a downgrading to its investment rating, and Central, which doesn't have the balance sheet strength to underpin the pipeline.

Then there is Jemena, which, Kavonic says, may be there "willing to believe the story and seek potential upside and expansion down the line", but it's not like pipeline companies to usually take that kind of upstream risk.

That leaves the government, if they see the externalities and the nation-building aspects.

"Would they be willing to go in? You're talking about technical upstream risks here being taken by parties who are not necessarily most directly familiar with them," Kavonic pondered.

"That's why still think that this FID is not certain."

Farruggio said that even if the unconventional reserves do materialise, he questioned whether they could they actually be delivered competitively into the east coast market.

"Firstly they need to prove the unconventional reserves, secondly they need to produce it at a lifting cost that will make it competitive into the east coast market - and there are quite a lot of questions there," Farruggio said.

While the NT is very early stage in terms of unconventional development, Wood Mackenzie says that suggestions from analogues from other plays would be break-even costs of about $US7 at the wellhead, which, when delivered to east coast market, you're talking $A12-13-plus.

"That's not competitive with what's there at the moment with other domestic supply sources from CSG, even LNG netback pricing," Kavonic said.

"So it's a real challenge.

"Of course, maybe they go drill some wells and they get delivered at crazy rates then things may turn out different, but at this point it's all hope."

Wood Mackenzie sees the economics of an FSRU to import LNG into Victoria. 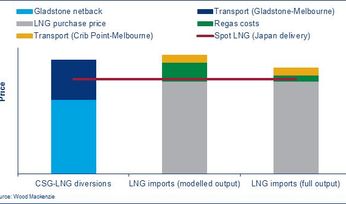 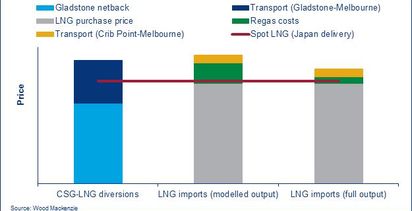