It is the location of North America's largest current oil field, Prudhoe Bay, which originally contained over 25 billion barrels of oil. Furthermore, the basin is surrounded by several other large oilfields, having together produced over 17 billion barrels of oil since 1977 through the Trans Alaska Pipeline System.

88 Energy now has net half a billion acres of exploration ground across multiple world class assets with multi-billion barrel discovery potential on the North Slope, with Peregrine joining Project Icewine and the Yukon Leases in 88 energy's portfolio.

Combined, these prospects have a mean unrisked recoverable prospective resource of 1.6 billion barrels of oil, as per an independent report generated by ERC Equipoise.

To the north and south of Project Peregrine sit major oil discoveries.

Willow, located to the north of Peregrine, is a 0.75 billion barrel discovery made by oil major ConocoPhillips (NYSE: COP).

A recent well drilled by ConocoPhillips, just 15 kilometres from Project Peregrine, encountered hydrocarbons at its Harpoon prospect which is interpreted to be directly on trend and analogous to the Harrier prospect at Peregrine.

The Peregrine Project also lies directly to the north of the Umiat oil accumulation that's estimated to have greater than 1.0 billion barrels of oil in place. 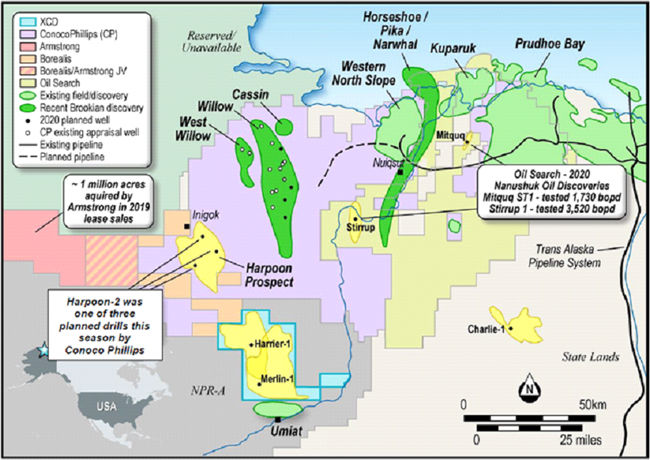 These wells will be testing the resource potential of Peregrine, with the aim of unlocking the next major oil discovery on the North Slope.

As 88 Energy currently holds 100% of the project, it intends to do a farm out deal with other partners that want exposure to near term upside.

The company will be undertaking low cost options for well drilling, estimating that the two wells will to cost ~US$15 million.

88 Energy has identified two primary prospects — Merlin and Harrier that total over 1 billion barrels, that it is intent on drilling in early 2021. Both prospects are located on trend to existing recent discoveries, with Harrier recently being de-risked by evidence of hydrocarbons at Conoco's Harpoon-2 well.

In addition to the newly acquired Project Peregrine, there remains significant opportunity and value at the company's Project Icewine.

Despite a negative market overreaction to early results from the Charlie-1 well at Project Icewine earlier this year further investigations have been promising.  These results were released amid ‘peak fear' from the COVID-19 pandemic and faced a record low oil price environment.

However, 88 Energy views that sell off as an overreaction.

The company has just released sidewall core analysis using two different techniques. Both demonstrate that the primary targets — the Seabee and Torok Formations — are in fact, full of oil.

Reservoir modelling of stimulation of the formations is now underway to understand flow potential.

More lab data and news is to come from Charlie-1 and 88 Energy has identified a new preferred well location to test the conventional targets at Project Icewine — a location with better reservoir quality.

A farm-in partner is also being sought to further investigate Project Icewine in the search for flowing hydrocarbons.

All up, major upcoming activity includes the farm-out of Project Peregrine in the lead up to the drilling of two wells in early 2021, plus the integration of new results from the Charlie-1 well, and reinvigoration of the farm out process for Project Icewine.

88 Energy prepares for spud in Alaska 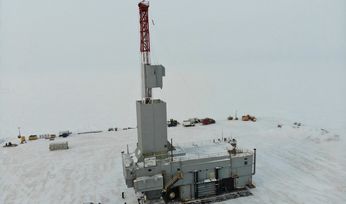 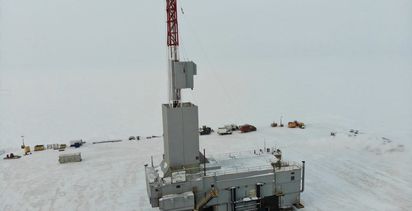