WITH such a recent initial public offering and a slew of news to market since listing on the Australian Securities Exchange in July it’s easy to forget how long Tamboran Resources has been operating in the Beetaloo Sub-basin and chasing the what it hopes is Australia’s newest gas province and large scale shale play.

The company's share price is now above its close on the day of listing.

"We were one of the first players in the Beetaloo in 2009," managing director Joel Riddle says. The American Riddle has been with Tamboran since 2013.

The company partners with operator Santos in EP161 in the Northern Territory. It holds its own acreage nearby and plans to drill well Maverick-1 based on learnings from the Tanumbirini wells it shares with the large Adelaide company. Tanumbirini 3H was drilled to measured depth of 4857 metres in early November.

"To give a little context, industry originally came out to explore for conventional traps in the 1970s and 1980s and didn't have any success. What we saw in 2009 was a basin that potentially could be explored from a shale perspective. In the US the shale revolution really got going in the early 2000s," Riddle said.

"We were an early mover and saw the Beetaloo as having the same characteristics.... After acquiring our permit in 2012 we drilled a basin opening well in 2013."

Explorers had to wait through several moratoriums on exploring with four inquiries over 10 years.

The most recent inquiry, led by Justice Rachel Pepper, found that provided its 139 recommendations were stuck to, the practice was safe. The moratorium was lifted in 2018 after being imposed in 2016.

It also mapped a process to develop an appropriate regulatory regime and a social license process. Drilling restarted the following year and ramped up through 2020.

Currently there are three exploration teams in the Beetaloo proper: Operator Santos and junior partner Tamboran Resources, Origin and Ireland's Falcon Oil and Gas, and Empire Energy, which is flying solo and which recently began drilling its first horizontal well at Carpentaria-2H.

There is a high quality shale in the area, Riddle says, noting the mid-Velkerri which has the same characteristics as one the US' most prolific shale basins, the Marcellus, which is the most frequent comparison.

"Following that discovery a lot of activity picked up, there was a lot drilled by Origin to the west of us."

Hess moved in, as did the private Pangaea, since acquired by fellow explorer Empire Energy.

"Right as that activity was picking up there was a moratorium in late 2016 and this really slowed the industry down a few years. It picked up again in 2019."

"We were able to drill Tanumbirini-1 and do a vertical flow test... similarities on the log with Marcellus," he said.

"This gave us a lot of confidence with Santos to get active this year... we are drilling two horizontal wells as we speak... if they produce as we hope, it will kick off a development project in the core area where we are focussed as a company."

Unlike Empire's Carpentaria-1 well, this is what he calls a "very dry gas play" with certifiers Netherland Sewell and Associates suggesting only five barrels of condensate per million cubic feet of gas.

"We've completed our first horizontal well a few months ago and we're drilling our second now."

He said the partners will flow both within the next two months.

"It's quite exciting, actually, what we've seen so far."

Tanumbirini-1 vertical frac showed that 80% of flowback came from the sweet spot in the Mid-Velkerri B, the primary target for most Beetaloo explorers.

"What we saw was very naturally fractured shale, unlike other shale plays that are not as productive, you don't have to frac as much (with this one)."

Flow testing will take between 90-180 days, so the partners can see what the decline looks like and how performance truly lines up with the Marcellus. He said the plan is to produce up to 100 terajoules a day.

"We're going to learn information from those two wells we are drilling with Santos, deploying those learnings in our next well which we plan to drill next year.

Fight between Tamboran and Pastoralist goes to Supreme Court. 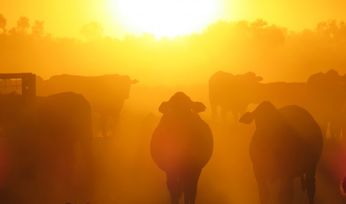 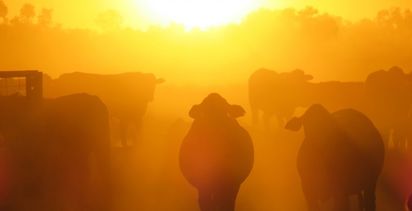