IT’S the season of protest in Perth with Fringe World protests continuing around Woodside Petroleum’s sponsorship of the month-long event and more climate protests on the steps of State Parliament. 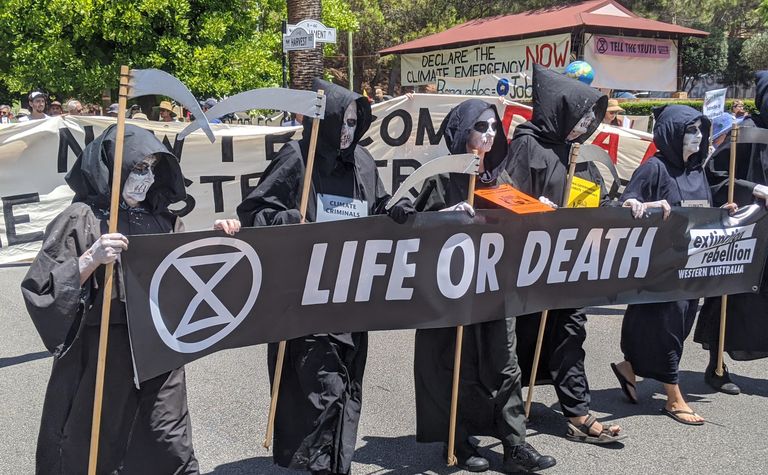 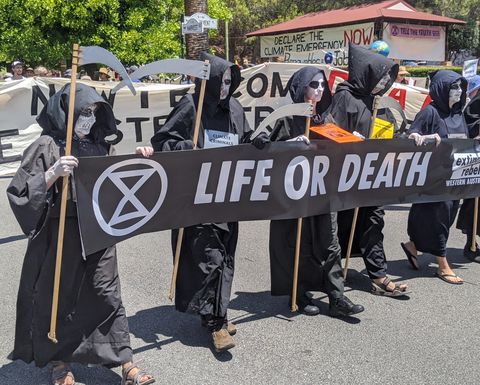 Saturday night at the Ice Cream Factory venue in Northbridge artist Ash Traylia held a panel discussion with a climate activist, an artist and an Indigenous spokeswoman to discuss Woodside's work in Western Australia and whether its sponsorship of Fringe is welcome.
Panel consensus: no.
At the last of four events called Ash Traylia: T@kls Sh!t ‘Perth's first late night trash-drag talk show', the group discussed social license, climate change, corporate sponsorship of the arts and if that led to censorship, and the Indigenous experience of living near operating mining and petroleum projects (it's no fun).
The night ended with a ‘Mr Woodenside' in a long greasy pony tail, dark shades and smoking a cigarette (an obvious dead ringer for CEO Peter Coleman) leading a shaven headed topless woman painted pink on a leash around the stage where the former repeated "fossil fuels, the future is fossil fuels" then destroyed a sofa as a finale.
Woodside has sponsored Fringe World, the world's third largest fringe event globally after Edinburgh and Adelaide, for eight years.
A Woodside spokesperson said the company declined to attend.
Artists also protested Chevron's sponsorship of the Perth International Arts Festival by projecting words above its signage at the launch reading "sponsored by WA's biggest polluter".
Ash Traylia alongside Extinction Rebellion protested at the opening of Fringe in January, dividing many, but was supported by Saturday's panelists who called the actions "brave".
"Our art [is being] tarnished and exploited as a multipurpose billboard for this corporation," a statement read aloud by the performer said at the festival's opening event.
This morning, protest group Extinction Rebellion hosted representatives from the Conservation Council of Western Australia and others at a climate vigil to create a policy document outlining how to decarbonise the state's economy.
"The terrain has dramatically shifted due to the bushfires which have galvanised the entire Australian population-- there is a growing mandate for rapid and radical change," Extinction Rebellion WA spokesman Jesse Noakes told Energy News.
Noakes noted the report on the proposed Burrup Hub by Clean State, which estimated the hub would emit 6 billion tonnes of CO2 over its lifetime, would be met with a proportionate response over the next 12 months.
"There is no targeted coordination yet but it is greatly needed," he said.
"If I were the developers, I would watch this space with some concern."
Protesters last year targeted Chevron and Woodside as a point of principle (after all, there isn't much coal to protest in the state) but now seem to be focussing more clearly on upcoming projects than just generalities.
Just after noon, 100 protestors marched to the steps of parliament house demanding Premier Mark McGowan accept their demands including redirecting fossil fuel subsidies to the renewable sectors, declare a climate emergency and setting clear emissions reduction targets.
He declined.
The state currently has an ‘aspirational' target of net-zero emissions by 2050. 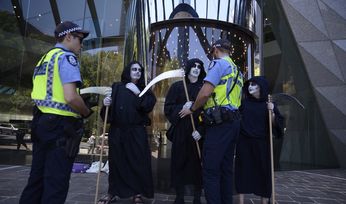 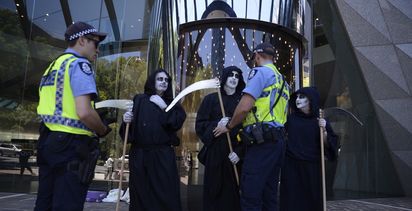