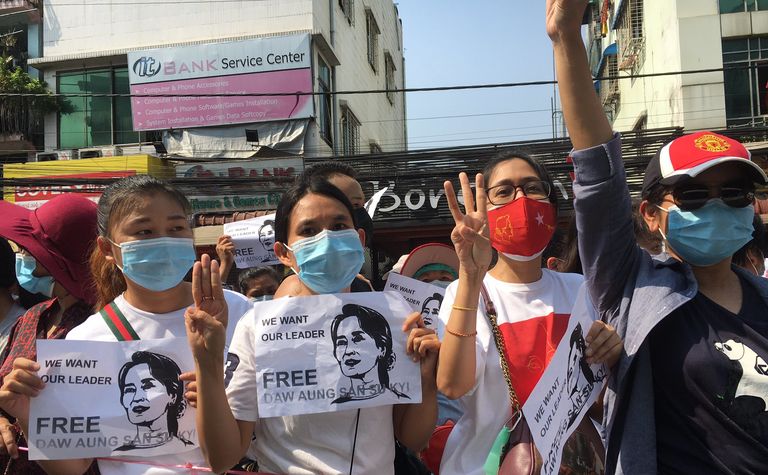 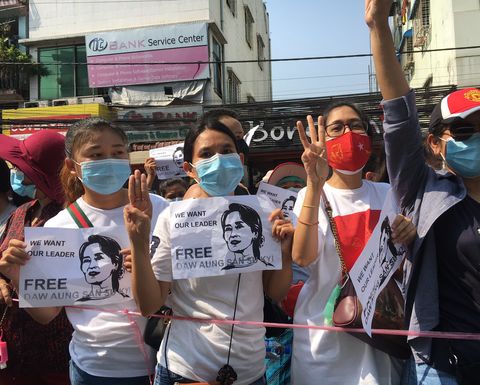 Protesters last year after the coup

It will take a $200 million hit to profit as a result, it said this morning.
It has a 40% share of block A6 as joint operator and interests in AD-1 and AD-8, and shares the large A6 with the departing Total. Both are held with China National Petroleum Corporation International/
Its last drilling campaign was being conducted as the February coup occurred. Last year it relinquished perimits AD-2, AD-5 and A-4 and it is in the process of pulling out from AD-6, AD-7 and A-7.
It will also leave its PSC with Myanmar Oil and Gas Enterprise.
The Perth-headquartered company has been there since 2013.  The cost will be around US$138 million to NPAT for the year.
Last week in the back pages of its quarterly company also noted a $71 million spend on exploration in AD-7. Both costs will be excluded  from underlying NPAT. It also announced it had reduced its interest in Block A-7 from 45% to zero.
"Notice to terminate the Production Sharing Contract was accepted by Myanmar Oil and Gas Enterprise on 23 November 2021. The effective date is 30 September 2021 with the formal relinquishment process ongoing," it said then.
CEO Meg O'Neill said there was no longer a viable option for Woodside to continue its activities.
"Woodside has been a responsible foreign investor in Myanmar since 2013 with our conduct guided by the UN Guiding Principles on Business and Human Rights and other relevant international standards.
"Given the ongoing situation in Myanmar we can no longer contemplate Woodside's participation in the development of the A-6 gas resources, nor other future activities in-country," she said.
Total announced it was leaving the producing Yadana gas field two days ago, which it shares with Chevron.
The project sends gas from the field 400 kilometres to the Myanmar-Thailand border in the nation's south.
"TotalEnergies has firmly condemned on several occasions the abuses and human rights violations taking place there," a statement on its website read.
It will leave, without financial compensation, at the end of the next six-month contract period.
CEO Patrick Pouyanne said last year Total was "outraged by the repression that is unfolding in Burma".
His comments stood in stark comparison to former Woodside CEO Peter Coleman who told Energy News in early February the coup had been a "difficult decision" for the generals who believed their grievances over ballot counting at the November election went unheard.
"It's not up to us to judge the veracity of grievances they have around the previous election process," Coleman said.
"I understand [the Army] put together quite an extensive folder of grievances around the election that they wanted to be heard, and they weren't being heard.
"They were pushed up against a difficult decision point, the day of the coup was the day the new parliament was due to proceed."
The comments generated outrage, with Human Rights Watch calling out the executive, and suggesting the company was the "antithesis of corporate social responsibility".
After pressure the company released a note stating Coleman and Woodside did in fact support democracy, which he reiterated at the company's annual general meeting not long before he left.
In the same interview with Energy News he also suggested western companies leaving might not be a helpful option as it would leave the nation's oil and gas sector largely beholden to Chinese companies.
The company was in the middle of a drilling campaign as the coup took place last February; COVID-19 complications to travel had already left workers pulling extra time aboard the Transocean Dhirubhai Deepwater KG2 ultra deepwater drillship. The wells were commitment wells and not seen by analysts as core to company interests.
At the 2019 AGM Coleman was asked multiple questions about the company's involvement in Myanmar by activist investors, but he said Woodside remained committed to its program in the nation, which he said would have supplied supply the domestic gas market and to Thailand.
However, given its single line affirming three well campaign across blocks A-7, AD-1 and AD-8 in a 2020 quarterly and few statements on the larger A6 block, most believed the company had lost interest in Myanmar some time ago, where it once held stakes in a total of nine blocks.
"The commercial side of the progress has already been dragging on as it is," Credit Suisse analyst Saul Kavonic wrote then.
There are estimates that close to 1500 people have been killed and thousands more arrested since the coup was launched the day the newly voted in government was to take power.
Two weeks ago democratically elected leader Aung Sang Suu Kyi was arrested and sentenced to jail. She spent decades under house arrest when the country was run by the military; the junta stepped back and began to allow democracy in 2012.

Petronas out of Myanmar 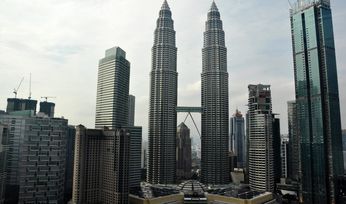 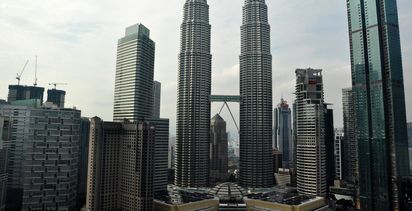