THE tit-for-tat squabble between Origin and Clough  now known as the BassGass dispute  has been one of the oil and gas industrys ugliest and most open confrontations see in years. The BassGas project should be operating by now, but Bass Strait has become a battleground with the operator, Origin, and contractor, Clough, at each others throats, both claiming the other party has failed to fulfil the conditions of the $400 million engineering contract.

The bitter dispute that has enveloped the two parties could take years to resolve. The conflict has already taken a heavy financial toll on both parties and triggered a series of financial claims and counterclaims.

Having a valuable project delayed when offshore fields are ready for production is undoubtedly hurting the bottom lines of the joint venture partners – Origin Energy (operator, 37.5%), AWE (30%), CalEnergy (20%) and Wandoo Petroleum (12.5%) –while Clough has said that BassGas delays and its relationship breakdown with Origin have inflicted $20 million in cost blowouts.

The key issues surrounding the project, which seeks to commercialise gas from the Yolla field in offshore Gippsland to meet 10% of Victorian gas demand for 15 years, appear to be whether each party has fulfilled its obligations under the contract and whether mercury in the gas stream was adequately provided for under the original contract.

Engineering work on the BassGas Project was scheduled for completion in early June. But as time passed it became apparent that something was wrong. Then in September the first in a series of recriminatory ASX releases by both parties was released.

Clough managing director David Singleton claimed that delays had occurred because Origin had fallen behind with its offshore drilling program and had failed to provide gas suitable for introduction into the development. He also said completion of the offshore works had been hampered because Origin had restricted access and not provided suitable offshore accommodation.

Clough submitted a certificate issued by Lloyds of London certifying the offshore facilities were contractually ready for start-up (RFSU) and implied that the delays had much to do with the mercury levels in the gas.

"The entire facility – both onshore and offshore – is ready for the introduction of hydrocarbons and has been for some time,” Singleton said.

“Clough maintains that the only issue preventing the introduction of hydrocarbons is the contamination of the gas. Nevertheless, Origin maintains that it is entitled to continue to levy liquidated damages on a daily basis for what it claims is failure to achieve RFSU".

Origin was quick to deliver its first riposte.

“While an inspection of certain elements of the systems on the platform was undertaken by a third party engaged by Clough, it did not cover all of the work required to be completed under the Contract to ensure that RFSU was achieved,” Origin said.

It also maintained that Clough was misrepresenting the mercury issue.

“Detailed analysis of the Yolla 4 results indicate that the raw gas is within contractual specifications but that traces of mercury have been detected in the Yolla gas stream,” Origin said.

“This eventuality was anticipated in the contractual arrangements with Clough and consequently the onshore plant was designed with the flexibility to deal with this issue. This has not impacted the delays experienced by Clough and is not expected to have any significant economic impact on the performance of the BassGas project.”

Origin is seeking liquidated damages for each day the project has been delayed. But Clough maintains it has met its obligations and that many of the hold-ups have been caused by obstructive tactics on Origin’s part and, in particular, on the part of the project manager.

Clough wants $25 million in 'quantified' claims from Origin, plus 'further general damages and damages under the Trade Practices Act'. These additional claims are understood to include $12 million in milestone payments Origin has withheld over the past two months and a similar amount in damages. It is also taking legal steps to have its performance bond returned.

On November 15, Clough served a notice of dispute on the BassGas partners, under which formal arbitration would be initiated if the parties were unable to resolve their problems.

In the notice of dispute, Clough contended that the joint venture's attempt to impose liquidated damages was wrongful.

More specifically, Clough claimed that at the time the contract was signed, the BassGas joint venture made various representations to Clough that were “false” and “misleading”. These representations related to the conduct of the joint venture's project manager and to an undertaking to jointly identify and implement cost savings.

The BassGas partners repeated their dismissal of Clough’s allegations and said they had full confidence in their project manager and his integrity.

Hopes of any reconciliation were then dashed during the mediation period on November 29 when, without warning, Origin cashed a $19.3 million performance bond on the grounds that Clough had failed to meet certain contractual obligations.

Then on December 17, Origin took the inflammatory step of ordering all Clough staff to leave the Bass Gas sites

Finally, in what may be the drawn-out saga’s closing chapter, Clough announced on December 22 an arbitrator had been appointed. Professor John Uff QC of Keating Chambers, London – who is experienced in construction disputes and arbitrations – would preside over the first directions hearing in Melbourne early next year.

Given the bitterness of this dispute, Professor Uff has his work cut out for him. 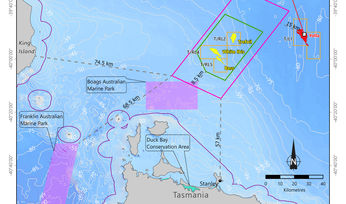 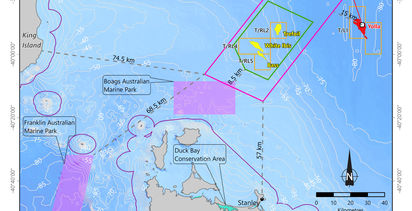