Shell and BP have achieved first production from the giant, five-well Na Kika oil and gas project in the deepwater Gulf of Mexico.

The five independent fields, Kepler, Ariel, Fourier, Herschel and East Anstey, each of which would be uneconomic to develop on its own have been developed with the installation of a centrally located, permanently-moored semi-submersible floating production facility.

This is thought to be the first time a hub-type system has been used to develop a group of fields all of which are of small to medium size.

Na Kika's semi-submersible production facility is moored in water some 6,300 feet deep, the deepest for any installation of its type in the world, with the individual wells in water depths between 5,800 and 7,000 feet.

A sixth field, Coulomb, which is 100% owned by Shell and located in 7,600 feet of water, will be tied back to the Na Kika host facility as production capacity becomes available.

BP and Shell also announced the start up of the 75-mile Na Kika segment of the Okeanos Gas Gathering System from Na Kika to Main Pass 260 where the gas will be transported to various onshore markets via the BP/Shell Destin pipeline system. Okeanos will transport gas from deepwater discoveries in Mississippi Canyon and the eastern Gulf of Mexico. The Na Kika segment of the Okeanos pipeline system was built by Shell, but is operated by BP.

"We are very excited about Na Kika start-up. The facility adds significant production to our deepwater portfolio and is purpose-built for further subsea tie-backs from future discoveries in the area," said Kenny Lang, vice president of BP's Deepwater Production Business Unit. "We believe the deepwater Gulf of Mexico offers tremendous opportunities for BP." 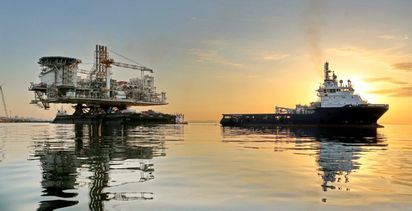