Australian renewable energy company, Novera Energy Limited, has further progressed development of its wind farm projects, winning approval for a new wind farm in the UK and calling for construction tenders for a large Australian project.

Novera Energy, which intends to announce details of its planned initial public offering early in the new financial year, is co-developer of the Mynydd Clogau wind farm in Wales, United Kingdom, which has been granted planning approval by the Welsh Assembly.

The approval is for 17 turbines, each with a projected capacity of around 660kW and the proposed project is supported by a long-term power sales contract arising from the UK Government's Non-Fossil Fuel Obligation.

Novera Energy has been developing this project in joint venture with Renewable Energy Systems, a leading international wind energy developer and part of the UK based Sir Robert McAlpine Group of companies.

In Australia, Novera Energy and its partner, Wind Prospect, have issued a limited tender for the construction of the Yabmana wind farm, located between Cowell and Cleve on South Australias Eyre Peninusla.

Novera Energy and Wind Prospect each have a 50% interest in the development of the Yabmana wind farm.

In January 2002, planning approval was given by the District Council of Franklin Harbour for 35 wind turbines at the Yabmana site, with the wind farm's average annual energy yield expected to be sufficient to power 31,000 South Australian homes.

Novera Energy Chief Executive Officer, Dr Len Humphreys said: "The approvals for both these projects are significant steps in the growth of the company™s portfolio of wind projects in the UK and Australia. We look forward to working with RES and their involvement in the Mynydd Clogau wind farm is further proof of Novera Energy's success in forming strong development partnerships."

"The project at Yabmana builds on last year's approval for Novera Energy's co-development with Wind Prospect of the Green Point wind farm. Wind power is universally recognised to be an efficient, proven and reliable technology and, in partnership with Wind Prospect, we hold a significant portion of the total wind farm sites with planning approval in Australia today."

RES' Director of Development, Peter Quilleash, said, "We are delighted to win planning approval for the Mynydd Clogau project and look forward to the start of construction, currently estimated for 2003." 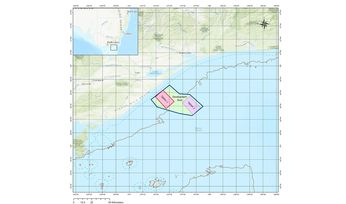