THE recent fatal crash of one of its Super Puma helicopters appears to have been the final straw for US based aviation firm CHC Group, which has filed for voluntary chapter 11 bankruptcy protection to facilitate restructuring, even as voices grow demanding that the Super Puma chopper be scrapped.

"Like many companies in the oil and gas industry, CHC's operations have been significantly affected by the dramatic decline in oil prices since their peak in 2014 and general uncertainty in the energy market, which has led to decreased customer demand and an increase in idle aircraft," the company said in a statement.

"Despite significant efforts to reduce costs, these factors, coupled with CHC's debt and aircraft lease obligations, resulted in the company's decision to engage advisors to assist in evaluating strategic alternatives to improve its capital structure."

The company said the reorganisation is aimed at strengthening its financial position by reducing long-term debt and enhancing financial flexibility while allowing it to manage and operate its fleet of aircraft.

CHC said it expects to maintain sufficient liquidity throughout the restructuring process to maintain its continuing business operations, including its flight services to the North Sea oil and gas industry.

Civil aviation authorities both in Norway and UK have grounded all the Super Puma helicopters of the type, except those used for search and rescue operations until further notice.

The fatal crash of an Airbus EC 225 Super Puma helicopter this month, killing two pilots and 11 oil field workers leaving Statoil's Gullfaks-B platform, has sharpened the focus on the risks of transporting workers to remote platforms, and it has sparked a petition called for the model to be retired.

More than 26,600 people have signed the online petition at Change.Org calling for the model to be removed from service as is has "been involved in one incident too many" resulting in fatalities.

The petition, which had an original target of 15,000 signatures, calls on the UK's Civil Aviation Authority to scrap the Super Puma.

The Eurocopter became popular after the 1986 British International Helicopters crash, when a Boeing 234 Chinook crashed killing 45 people, the worst such accident in the North Sea.

The oil industry decided that the Chinook was too big for the offshore support task and the remaining Chinooks were withdrawn and sold.

The petition says that the CAA should put the lives of offshore oil workers and the pilots "before vested interests, and revoke the air worthiness certificates for this aircraft".

"Failure to do this will result in more needless deaths," it warns.

Over the past four years alone there have been half a dozen ditchings and more than 30 deaths involving the Super Puma.

The comments in the petition voice a lack of confidence in the Airbus-built chopper's safety record, and contain messages of support from the families of workers who have been killed in prior crashes.

Early reports around the latest crash suggest that the rotor and detached mid-air, and the aircraft crashed into a small island in Turoy, near Bergen.

While the helicopter had been given the all-clear after routine checks last September, but in recent weeks it had been forced to turn back twice.

The Super Puma appears to have developed a poor reputation among North Sea workers.

In 2009 a Eurocopter Super Puma belonging to Bond Offshore Helicopters crashed 11km from the Scottish coast while returning from a BP oil platform in the Miller oil field, again after the main rotor separated from the frame due to a catastrophic gearbox failure.

Bond also operated a Eurocopter EC225LP helicopter that ditched in the North Sea two months earlier during a night visual approach to the ETAP platform, although all 18 aboard escaped and were rescued.

An investigation by the Air Accidents Investigation Branch identified a 360-degree circumferential crack in the bevel gear vertical shaft in the main gearbox, in the vicinity of a manufacturing weld, causing disengagement of the drive to both mechanical oil pumps.

On October 2012 another CHC EC225 was forced to ditch some 70km offshore, West of Shetlands, while travelling from Aberdeen to the West Phoenix drilling rig.

While all 19 on board were rescued the AAIB again found a 360-degree crack found on the bevel gear vertical shaft of the gearbox.

In both of the 2012 incidents, although the main gearbox lubrication system had failed, the backup system was working correctly but displaying an erroneous warning light, due to an incorrect specification of a pressure switch, which led to the helicopters being ditched.

The EC225 Super Puma has been the workhorse of the North Sea since 2004, and while Airbus has started work on a successor, the X6, it is not expected to be in use until 2030.

Edit: While Energy News is aware of at least one Super Puma operating in Australia on the North West Shelf, a reader has written in to say there are up to 20 operating Down Under. 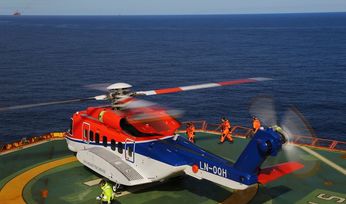 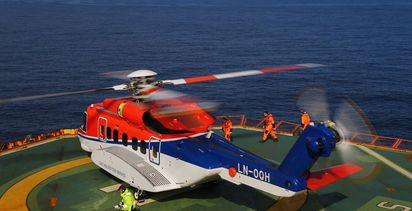 CHC CEO says Australian deepwater must be competitive with US shale