WOODSIDE, BHP Billiton Petroleum, Inpex and Origin have been recognised for outstanding achievements in APPEA's annual environmental and safety awards, while Parker Drilling and Stena Drilling has been honoured by the International Drilling Contractors Association for their high standards of workplace safety.

On presenting the award, Wall said BHP's development of a common standard for training offshore crane operators was a great safety initiative for the industry.

The judges also made special mention of Woodside's work to establish a safe shipping fairway from Dampier to Glomar Shoal.

"This is an initiative with significant industry-wide implications that has reduced the risk of collision between vessels and offshore oil and gas facilities and the threat of security to assets," Wall said.

In addition, the International Association of Drilling Contractors honoured outstanding achievements in the drilling industry.

This year's onshore drilling operations safety award was given to Parker Drilling Company.

The offshore safety award was given to Stena Drilling, which has had just one recordable incident in the last 12 months.

This year, APPEA gave two environment awards: one for a producer, the other for an explorer.

Origin's facility has enabled the production of fresh water from traditional production waste streams for a multitude of beneficial uses and improved environment water flows in regional communities.

The winning explorer was Inpex for its innovative approach to ensuring a small environmental footprint for recent geotechnical and environmental drilling operation on the Maret Islands, Western Australia.

Inpex's use of a helicopter and modified drilling rig resulted in a footprint that disturbed less than one-tenth of a percent instead of the 10% that would have been disrupted through traditional onshore drilling operations.

APPEA also honoured an individual, granting an honorary life membership to Bill Mason after 40 years of public service devoted to oil and gas legislation and regulation.

Involved with administering the Petroleum Submerged Lands Act for decades, Mason was a mentor to many West Australians and other regulatory colleagues, on the subject of the act.

"Bill grew with the industry in Australia and always provided clear and frank advice on title related matters while maintaining the integrity of the public service," Wall said.

"It's safe to say that Bill was one of a kind and his vast knowledge on the subject or petroleum legislation and regulation will remain unparalleled." 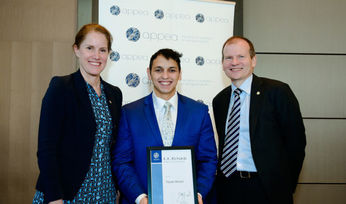 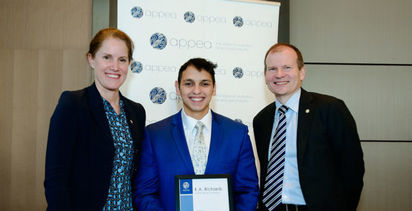