THE joint industry project between Woodside Petroleum and Australia’s biggest miners has developed a new ship design that demonstrates the feasibility of LNG-fuelled bulk carriers in a “green corridor” between Australia and China. 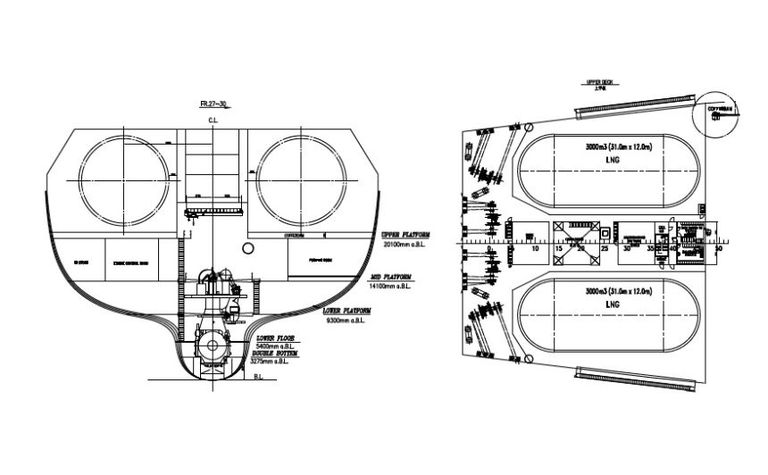 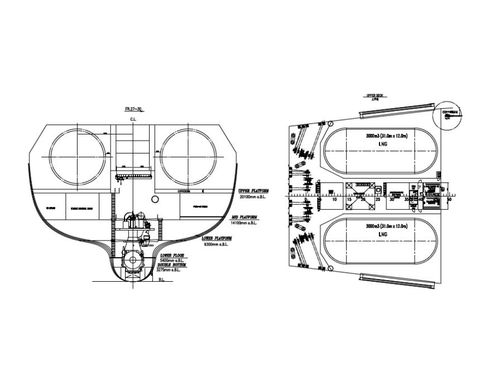 The design of the LNG fuel tanks at the upper deck level close to the engine room, which minimises risks associated with long cryogenic pipelines.

The design, which could be put into development this year, would carry bulk commodities such as iron ore and coal between Australia and its largest trading partners.
Woodside, Mitsui OSK Lines, Rio Tinto, BHP Billiton, Fortescue Metals Group, U-Ming Marine, SDARI and DNV GL presented the results from Stage 1 of the Green Corridor JIP at the Nor-Shipping event in Norway last week.
The JIP - originally inked by Woodside chief operating officer Mike Utsler in January with BHP, Rio Tinto, DNV GL, Shanghai Merchant Ship Design and research Institute and Mitsui OSK - presented its LNG-fuelled Newcastlemax design.
The design, which is in the process of receiving approval in principle from DNV GL, is ready to serve as the outline specification for newbuild orders this year, the firm said.
Major charterers have long contemplated the idea of developing LNG fuelling infrastructure for the vessels operating on the Australia-China trade routes.
Australia's LNG investment boom and looming International Maritime Organisation sulphur emissions restrictions are now making the option of LNG as a single-system solution for emissions compliance ever-more attractive.
Chinese ship owner SDARI developed the design of the 210,000 deadweight tonnage Newcastlemax bulk carrier based on its high-energy efficient Green Dolphin design.
The JIP operators then swiftly decided on duel fuel engines due to its mature nature with multiple suppliers offering solutions, along with the operational redundancy it offers.
Based on fuel consumption analyses an LNG fuel tank size of about 6000cu.m was found to be optimal, with bunkering in Australia for the round-trip.
This would propel the new business opportunity Woodside first flagged it had identified at LNG18 in Perth last year of LNG bunkering across northern Australia.
Utsler inked a five-year charter contract with Siem Offshore at LNG18 to deliver Australia the southern hemisphere's first LNG-powered marine support vessel to be bunkered out of the Kings Bay supply base in Karratha to support Woodside's North West Shelf and Pluto operations.
He said Woodside, which operates around 16 platform supply and offshore support vessels, wants to position itself as the "partner of choice" by demonstrating the new capability on a broader basis for future partners.
After several locations for the LNG fuel tank were considered, the JIP operators decided that the optimal solution was to place the two LNG fuel tanks directly above the engine room and submerged a few metres below the main deck.
This would protect the fuel tanks and enhance fire protection without reducing the cargo carrying capacity.
DNV GL - maritime business director bulk carriers Morten Lovstad said the JIP had come up with a design that accounted for market and trade route characteristics such as safety and ease of operation, cargo and fuel flexibility, energy efficiency and economic viability.
He said the JIP was optimistic that the new design would materialise into firm orders in the "near future".
"We hope this mutual collaboration will contribute to building the positive momentum of the industry to meet environmental and social requirements," Mitsui OSK executive officer, deputy director general, dry bulk business unit Toshiaki Tanaka said.
Tanaka said the design's payback period was under 10 years, and could even be cut down to 6.7 years under the "optimistic" projection, based on analyses of a wide range of capital and operational costs, including LNG and low sulphur fuel oil price sensitivities.
The JIP also conducted a high-level bunker supply chain assessment to come up with the payback period estimate.