The mapping and seismic surveys on Drillsearch's permits to date have identified two significant prospects and at least five additional interesting leads that have potential for multiple stacked targets.

Drillsearch has targetted the two firmest prospects as Marina, WA318P, with an estimated potential of 235 million barrels of oil (mmbbl) in place and Lesueur, WA319P, with a potential 77mmbbl.

The 2004 survey is designed to provide a closely spaced grid of 2D seismic data at Marina where Drillsearch's 2002 seismic survey identified a class two AVO anomaly indicating the potential presence of hydrocarbons.

The detailed grid of data, when analysed, should further define the extent of this AVO anomaly and provide an accurate drilling location at the crest of the structure.

Re-mapping in the Lesueur area has delineated a significant four way dip closure up dip from the Leseuer-1 well, which was not tested when that well was drilled in 1985. Significantly, the Lesueur well intersected a 112m residual oil column in the Keyling Formation. 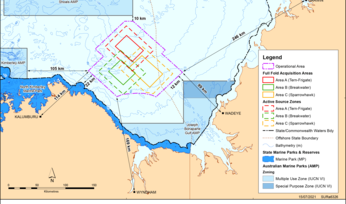 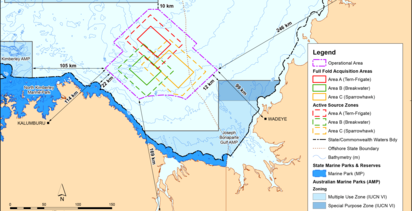